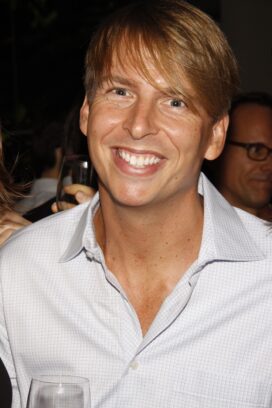 Jack McBrayer plays Kenneth, the grinning office assistant on the TV sitcom 30 Rock (starring Tina Fey). A native of Georgia, he went to school at the University of Evansville in Indiana and got his comedy career going in Chicago. He did improvisational comedy there in the late 1990s, including with Second City, then moved to New York, where he was a member of Amy Poehler‘s Upright Citizens Brigade Theatre. While in New York he made a few appearances on Conan O’Brien‘s late night show (2002), then moved to Los Angeles (2004) to work in television. McBrayer has been on 30 Rock since 2007, playing a wide-eyed southern boy in the big city of New York.

McBrayer makes an appearance in the video for Mariah Carey‘s song “Touch My Body” (2008)… When he’s not on TV he’s performing on stage with comedian Paul Scheer.

Something in Common with Jack McBrayer