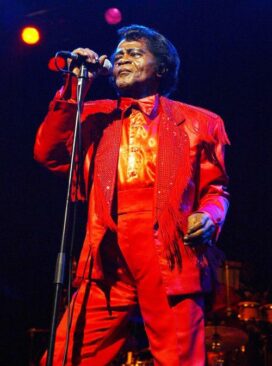 Singer James Brown was a founding inductee of the Rock and Roll Hall of Fame and one of the most influential popular musicians of the 20th century, a wildly energetic performer dubbed the Godfather of Soul.

His inventive mix of gospel, R&B and primal rock and roll is credited with bringing funk to popular music, and with breaking ground not only for funk and soul but for disco music and rap as well.

James Brown’s personal life was equally notorious: he was arrested and jailed several times for misuse of drugs, alcohol, guns and vehicles and for domestic disputes with his four wives.

Despite all that, Brown toured relentlessly throughout his life, and his high-octane, hard-dancing performances earned him the other nickname of “The Hardest Working Man in Show Business.”

He was inducted into the Rock Hall in 1986 (along with other founding members like Chuck Berry and Elvis Presley) and was awarded the prestigious Kennedy Center Honors in 2003.

According to the Rock Hall of Fame, Brown’s nicknames include “‘Soul Brother Number One,’ ‘the Godfather of Soul,’ ‘the Hardest Working Man in Show Business,’ ‘Mr. Dynamite’ and even ‘the Original Disco Man’”… Brown is no relation to Jim Brown, the professional football running back.

Something in Common with James Brown