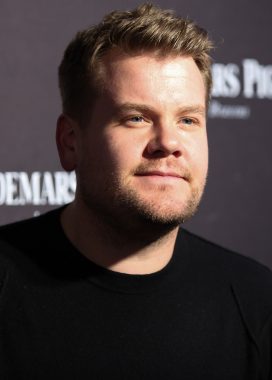 James Corden is a British comic actor and writer who is also known as the host of the television talk show The Late Late Show with James Corden. A popular segment of that show, “Car Karaoke,” in which Corden sings along with celebrities such as Elton John, Adele and Justin Bieber, became an internet hit in 2015.

James Corden began his career in the late 1990s, and from 2000 to 2005 he starred in the British TV series Fat Friends. He was also the star and writer for the series Gavin & Stacey from 2007 to 2010, and all the while he was also appearing on stage and in films, as well as popping up as an emcee and award presenter.

On stage he starred in The History Boys, and won a Tony Award for the 2011 Broadway production of One Man, Two Guvnors.

He replaced Craig Ferguson as the host of The Late Late Show in 2014. He hosted the Tony Awards in 2016, presiding as the hit musical Hamilton took home 11 Tonys in all.

Something in Common with James Corden