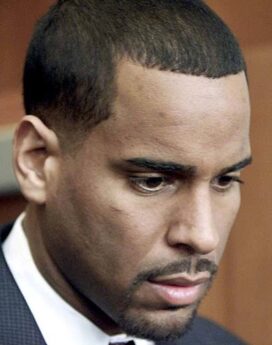 Recent and archived stories about Williams and his troubles

Straight stats and highlights from NBA.com

Local coverage of his 2004 trial

Jayson Williams played nine seasons (1990-99) in the National Basketball Association, but is now better known as the guy from the New Jersey Nets who shot his limo driver. A 6’10” power forward, Williams spent two seasons with the Philadelphia 76ers (alongside Charles Barkley) before being traded to the Nets in 1992. He earned a reputation as an effective rebounder and was selected as an All Star for his ’97-98 season (when he averaged 13.6 rebounds a game). After signing a seven-year, $86 million contract, Williams broke a leg and injured his knee in an on-court accident in 1999, which ended his career. He retired and became an analyst for NBC television, and in 2000 published an autobiography, Loose Balls. On 14 February 2002 he shot and killed Costas “Gus” Christofi at a late-night party at Williams’s home in Milford, New Jersey. Williams told authorities that Christofi shot himself with a shotgun, but police eventually arrested Williams and accused him of recklessly handling a gun — and trying to make it look like Christofi killed himself. Williams pleaded not guilty to aggravated manslaughter and nine other charges. His trial began in February of 2004; on 30 April 2004 he was acquitted on the charge of aggravated manslaughter, the most serious charge, and convicted on four lesser charges, with the jury not being able to reach a decision on the remaining charges. In April of 2006 an appeals court ruled that Williams could be retried for reckless manslaughter. After years of legal wrangling — and a few more legal problems stemming from erratic behavior — Williams pleaded guilty in January of 2010. He was sentenced to five years in prison, with a minimum of 18 months in prison before becoming eligible for parole.

On 27 April 2009, police used a stun gun to subdue Williams in a New York hotel and then had him hospitalized after he was reported to be suicidal and acting erratically… Williams averaged 7.3 points and 7.5 rebounds a game during his professional basketball career … Williams and Christofi’s family settled a wrongful death lawsuit out of court in 2003, with Williams paying the family $2.5 million… Williams’s wife, Tanya Young Williams, filed for divorce in February of 2009.

Something in Common with Jayson Williams