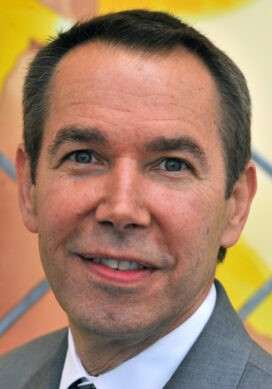 Jeff Koons is a conceptual artist out of New York whose post-modern projects elevate kitsch and pop culture to fine art and fetch millions of dollars at auction. Jeff Koons studied art at the Maryland Institute College of Art in Baltimore and Chicago’s School of the Art Institute, and earned his degree in 1976. Jeff Koons had his first solo show in 1980, and by the mid-1980s he was making a name for himself in New York as a modern pop artist along the lines of Andy Warhol and Roy Lichtenstein. Employing craftsmen and manufacturers, Koons designs sculptures that mimic crappy knickknacks and iconic objects, earning both praise and condemnation from critics. Koons is no stranger to showmanship and self-promotion, and his 1988 sculptures Michael Jackson and Bubbles (porcelain) and Ushering in Banality (polychromed wood) helped make him rich and famous. Jeff Koons followed his Banality phase with a pornography-as-art phase (Made in Heaven) that featured he and his then-wife in explicit erotic sculptures, photographs and paintings. She was Hungarian-born porn actress Ilona Staller, known as “La Cicciolina” and a celebrity in her own-right as an Italian Member of Parliament (1987-92). Staller and Koons divorced in 1994, and Koons spent the next several years trying to gain access to their son Ludwig (b. 1992). His other projects include a giant flower-covered puppy in New York City, the Celebration series of holiday-themed objects precisely constructed as fine art, and Popeye, a series of metal-fabricated replicas of inflatable toys. Mixing art, commerce and culture has been very profitable for Jeff Koons: his Hanging Heart (Magenta / Gold) brought $23.6 million at a 2007 auction, and Balloon Flower (Magenta) brought $25.7 million in 2008.

Something in Common with Jeff Koons