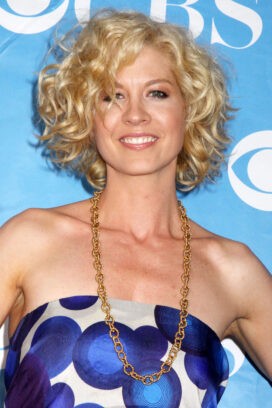 Part ditzy New Ager and part bodacious California babe, Jenna Elfman starred in the sitcom Dharma and Greg (1997-2002). She also starred in the short-lived 2006 sitcom Courting Alex. Her films include Krippendorf’s Tribe (1998, with Richard Dreyfuss), EDtv (1999, with Ellen Degeneres) and Town and Country (2001, with Warren Beatty). Elfman executive-produced and starred in the independent film Touched in 2005, then made a development deal with CBS in 2006. She starred briefly in the TV series Courting Alex (a dozen episodes in 2006).

Her character’s full name in Dharma and Greg was Dharma Freedom Finkelstein-Montgomery… Like John Travolta and Tom Cruise, Elfman is a prominent Hollywood Scientologist… She married Bodhi Elfman, the nephew of composer Danny Elfman, in 1995.

Something in Common with Jenna Elfman