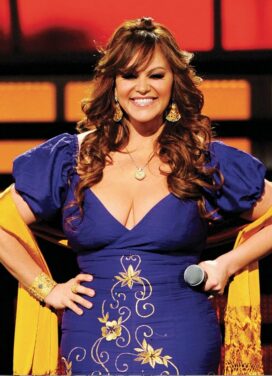 Jenni Rivera was a Mexican-American singer and actress whose career was cut short when she was killed in a plane crash in 2012.

Born and raised in southern California, Jenni Rivera had a musical family but didn’t get involved in the business right away — pregnant at 15, she dropped out of high school to get married and take care of the first of her five children.

Rivera eventually finished high school and went on to college, all the while rising in popularity as a singer after her first record in 1995, Chacalosa (“Party Girl”).

By 2000, Rivera was hitting the Latin charts and earning a reputation as “La Diva De La Banda” for her brassy style of music.

She was nominated for Latin Grammys in 2003, 2008 and 2010, by which time Rivera had branched out into the business world, with interests in real estate, cosmetics and perfume.

She also became a TV star, thanks to the 2011 Mun2 reality series, I Love Jenni, and a radio show, Contacto Directo Con Jenni Rivera. She also appeared as a vocal coach on the talent show La Vox… México.

Rivera was killed in the crash of a private plane shortly after performing in Monterrey, Mexico.

Jenni Rivera’s daughter, Chiquis, starred in her own reality TV series (produced by Jenni), Chiquis & Raq-C… Jenni Rivera was nominated for 11 Grammys in 2013 (posthumously), and became the first Latino to have an exhibit in the Grammy Museum.

Something in Common with Jenni Rivera