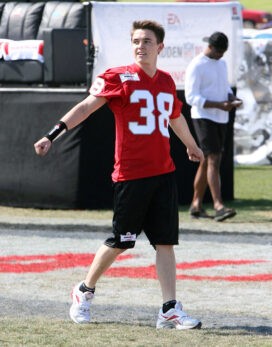 Jesse McCartney is a singer and actor known for his hit single, “Beautiful Soul” (2003), and for his role in cable TV’s Summerland (2004-05). Young, blonde and cute, McCartney is a pop music performer with experience in theater (he toured nationally in The King and I) and a boy band pedigree (Dream Street, 1999-2002). McCartney also appeared on the daytime television soap opera All My Children (1998-2001) and earned two nominations for Outstanding Younger Actor. His debut solo album, Beautiful Soul (2004), was a hit with MTV and Radio Disney audiences, and McCartney’s kid-friendly style helped land him a duet with Anne Hathaway for the film Ella Enchanted (2004). As his music career was taking off, McCartney was cast in the WB Network’s drama Summerland, playing a California surfer, but the show didn’t last long and he was back in the studio. Since then he’s done voice work in the movies — Alvin and the Chipmunks (2007) and Horton Hears a Who (2008) — and released another album, Departure (2008).

Jesse is not related to Sir Paul McCartney.

Something in Common with Jesse McCartney