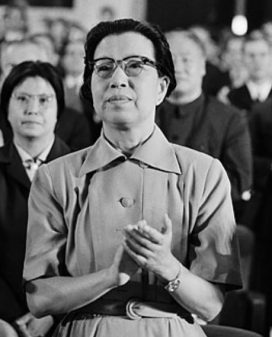 Jiang Qing was the last wife of Mao Zedong and one of the most powerful women in China while Mao was alive. After he died she was tried and sentenced to death as an enemy of the state.

Jiang Qing joined the Communist Party in the early 1930s, after a brief career as an actress in Shanghai. She met Mao in Yenan when she was 24 and he was 45; Mao was still married, but that soon ended and Jiang and Mao were married in 1939.

As the story goes, Mao had to agree to the party’s demands that Jiang not be involved in politics — for at least several years. Though she held minor government posts during the 1950s, it wasn’t until the 1960s that Jiang began to gain power as a surrogate for Mao.

During the Cultural Revolution, Jiang was at her peak. Elected to the Politburo in 1969, she introduced sweeping changes and, backed by the Red Guards, encouraged mass crowds to publicly humiliate and violently punish anyone not on the correct ideological path.

After Mao’s death in 1976, she was arrested by her political enemies, accused of leading the “Gang of Four” and attacked as a counter-revolutionary. She and the other gang members (Wang Hongwen, Shang Chunqiao and Yao Wenyuan) were tried on national television and convicted in 1980.

Jiang was sentenced to death, but then her sentence was commuted to life. In 1991 Chinese officials announced that Jiang had committed suicide on 14 May.

Something in Common with Jiang Qing