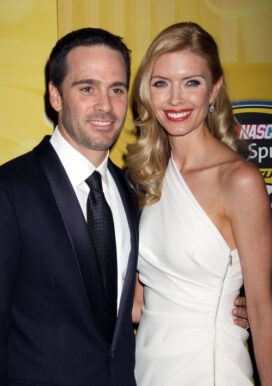 With four consecutive championships between 2006 and 2009, NASCAR driver Jimmie Johnson dominated the sport during the late 2000s. A California kid raised on motocross, he went from racing bikes in the 1980s to racing off-road trucks in the 1990s, and that led to his debut on the NASCAR circuit in 2001. He finished fifth in his rookie season (2002), and the next year he spent the season in the top 10 and finished 2nd overall. Driving for Hendrick Motorsports and sponsored by Lowe’s, he finished strong every year and his first championship came in 2006. Although dominant in his sport, Johnson has never been much of a media darling. He’s been called too “vanilla” (boring), and his fiercest detractors think his early championships are tainted (his crew chief, Chad Knaus, was fined and suspended in 2006 and 2007 for numerous instances of rule violations on Johnson’s car, but Johnson won the championships anyway). That aside, his fans — and the record books — say Johnson is one of NASCAR’s all-time greats.

Something in Common with Jimmie Johnson