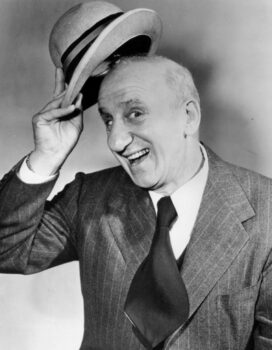 Big-nosed and boisterous, Jimmy Durante was a vaudeville favorite who continued on as a star in the early days of radio and TV.

Originally a saloon piano player, Durante combined his ragged musical talents with a rumpled charm and endless jokes about his nose, a mighty instrument which earned him the nickname “Schnozzola” or just “the Schnoz.”

The 1935 stage musical Jumbo paired Durante with an elephant and boosted his career; he was a popular guest on the radio shows of stars like Bob Hope and Bing Crosby, and eventually hosted his own shows as well.

Jimmy Durante’s dese-and-dose New York accent was much parodied by impressionists of the day. He had a musical hit with the novelty tune “Inka Dinka Doo,” and his famous sign-off phrase was “Goodnight, Mrs. Calabash, wherever you are.”

Jimmy Durante is the guy who “kicks the bucket” at the start of the 1963 film It’s a Mad, Mad, Mad, Mad World… Hotbreath Houlihan, a character from Jimmy Durante’s radio show, was the inspiration for the nickname of ‘Hotlips’ Houlihan in the film and TV sitcom M*A*S*H… Jimmy Durante recorded a popular version of the song “Frosty the Snowman” in 1950; two decades later, he narrated the 1969 TV cartoon special Frosty the Snowman… The origin of the phrase “Goodnight, Mrs. Calabash” is unknown, and Jimmy Durante wouldn’t say what the funny phrase meant; his first wife died in 1943 and may or may not have been the “Mrs. Calabash” referred to.

Something in Common with Jimmy Durante