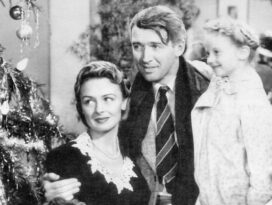 Jimmy Stewart was an American film hero from the 1930s through the 1950s, playing sturdy, honest, all-American types in a series of popular films.

He is now perhaps best known as the star of Frank Capra‘s It’s A Wonderful Life.

Jimmy Stewart got started in the movies in the 1930s, making his mark in studio-driven light comedies as a wide-eyed innocent.

Stewart earned an Oscar nomination for his defining role in Mr. Smith Goes To Washington, (1939) and the next year he won an Oscar for The Philadelphia Story (co-starring Cary Grant and Katharine Hepburn).

Stewart also performed often on radio, but his career in both fields was interrupted by World War II, in which he served as a bomber pilot in Europe.

He returned from the war with a distinguished record, and quickly earned a new Oscar nomination in what later became a holiday classic, the 1946 film It’s A Wonderful Life.

Jimmy Stewart reached the rank of colonel by the end of World War II.  In 1959 he was promoted in the Air Force Reserves to the rank of brigadier general… Late in life, Stewart made a series of popular appearances on Johnny Carson‘s Tonight Show, reading his own sentimental poetry. A particular audience favorite was “Beau,” his homage to a beloved pet dog.

Something in Common with Jimmy Stewart