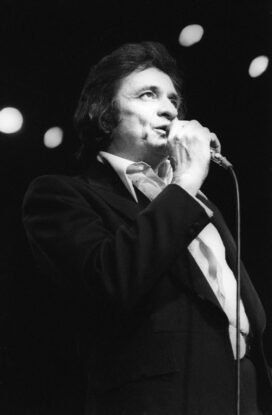 Country singer Johnny Cash was nicknamed “The Man in Black,” a nod to his wardrobe as well as to the darker themes of his music. He got his start with Sun Records in 1955. Like fellow Sun recording artists Jerry Lee Lewis, Carl Perkins and Elvis Presley, Cash used country and gospel influences in what was called rockabilly, an early form of rock ‘n’ roll. He wrote “Folsom Prison Blues” while serving in the Air Force and in 1956 the song became one of his first big hits. In the 1950s and ’60s Cash toured relentlessly and had many more hits, employing his rumbling, mournful baritone on tunes like “I Walk the Line” and “Ring of Fire.” In 1968 he married June Carter of the Carter Family Singers. Cash later performed with artists as diverse as Bob Dylan and U2. He earned a new audience with his 1994 acoustic album American Recordings and continued to record new songs in spite of ongoing struggles with pneumonia, diabetes and a nervous system disease known as autonomic neuropathy. Cash was inducted into the Country Music Hall of Fame in 1980 and the Rock and Roll Hall of Fame in 1992. Two years before his death, in 2001, he received the National Medal of the Arts for artistic excellence.

Johnny’s daughter, Roseanne Cash, is also a country singer… Johnny Cash was played by Joaquin Phoenix in the 2005 biographical film Walk the Line. June Carter Cash was played by Reese Witherspoon… A theatrical musical based on his life, Ring of Fire, opened in 2006.

Something in Common with Johnny Cash