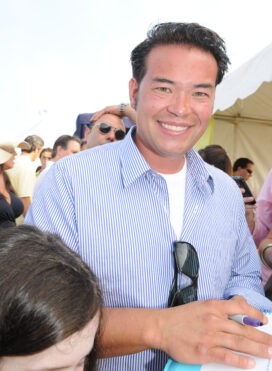 Jonathan “Jon” Gosselin gained fame as one of the stars of the TV show Jon & Kate Plus 8, a reality-based series from 2007 to 2009 that also featured his wife Kate Gosselin and their eight children. Jon and Kate married in 1999, and he worked a variety of jobs while she worked as a nurse. Using fertility treatments, Kate gave birth to twin girls in 2000 (Cara and Madelyn, born 8 October); in 2004, again after fertility treatments, Kate gave birth to sextuplets (Alexis, Hannah, Aaden, Collin, Leah and Joel, born 10 May). The family was featured on a TV special in 2006 and a follow-up special a year later, which then led to their own weekly show in late 2007. In early seasons of the show Jon worked for the state governor’s office as an information technology specialist, but for most of the show, the parents worked full-time sustaining their television careers through books, speeches and promotions. Before the show’s 2009 season, Jon was accused in the gossip sheets of infidelity, and the show’s season began with the frost of marital tension. The result was a ratings boost and amplified media attention for the couple and their children. They announced their plans to divorce in an episode that aired 22 June 2009, and for the next season of the show the name was changed to Kate Plus Eight, with a reduced role for Jon. His refusal to cooperate fully eventually led to the show’s end.

Gosselin is of Korean and European descent… As Kate appeared on Dancing with the Stars in 2010, Jon sued for custody of their eight children.

Something in Common with Jon Gosselin