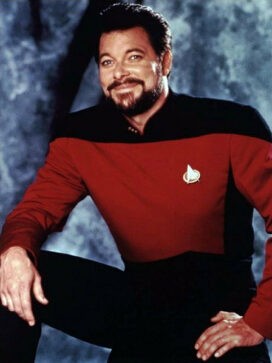 Jonathan Frakes played roguish Commander William T. Riker in the TV and film versions of Star Trek: The Next Generation (1987-94). Frakes started his acting career on the New York stage, but in the late 1970s re-located to southern California to work in television. After a string of guest spots on top prime time programs, he landed the role of Riker, the impetuous Starfleet loverboy second in command to Captain Jean-Luc Picard (Patrick Stewart). As the series went on, Frakes found his way behind the camera to direct several episodes, and after the series ended he directed the feature films Star Trek: First Contact (1996, with James Cromwell) and Star Trek: Insurrection (1998). He continues to act and do voice work, but in recent years has worked mostly as a director of television and film. He directed several episodes of TV’s Roswell (1999-2002) and the feature films Clockstoppers (2002) and Thunderbirds (2004, with Vanessa Anne Hudgens). In 2006 he taught film direction at Rockport College in Maine.

Frakes is married to actress Genie Francis, the Laura of “Luke and Laura” fame on the TV soap opera General Hospital… His birthday, 19 August, is the same as Star Trek creator Gene Roddenberry (1921-1991).

Something in Common with Jonathan Frakes