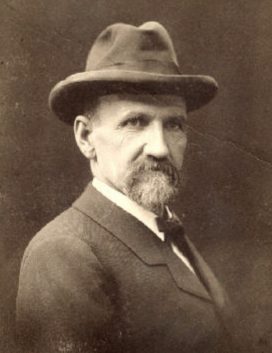 Joshua Slocum was the first man to sail around the world solo, ending his three-year voyage on June 27, 1898.

Born in Nova Scotia, he took to the sea at the age of 16. By 1869, Slocum had his own command, and he and his first wife spent many years in the shipping business, based in San Francisco. He had many adventures on the seas, including being tried and acquitted for murdering a pirate and an 1887 wreck off the coast of Brazil. From the wreckage, Slocum built a 35-foot sailing vessel and took his wife and two sons back to New York City.

He set out to circumnavigate the globe by himself on April 24, 1895 in a rebuilt 36-foot oyster boat, Spray. He supported himself by lecturing along the way, and after traveling 46,000 miles he completed the trip on June 27, 1898. His book, Sailing Alone Around the World (1899) was a popular success and is considered a classic of maritime literature.

In November of 1909 Slocum set out to sea and was never seen again.

Joshua Slocum became a naturalized American citizen while living in San Francisco in the 1860s…  Slocum did not know how to swim… In his later years he was jailed for indecent exposure in an incident blamed on failing mental faculties… It is believed by some that Slocum and Spray perished at sea due to being run over by a steamship… Thousands of replicas of Spray have been built over the years; singer Burl Ives owned one…  President McKinley met Slocum and gave him an autograph on September 6, 1901, shortly before the president was fatally wounded by Leon Czolgosz.

Something in Common with Joshua Slocum