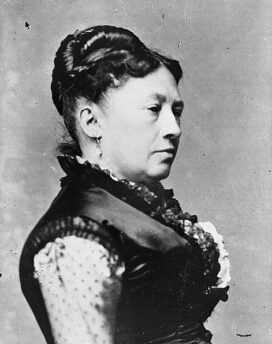 Julia Boggs Dent Grant was the wife of President Ulysses S. Grant of the United States of America. She was raised on a plantation outside of St. Louis and met Ulysses Grant in 1843. He had been a classmate of her brother, Frederick, at the U.S. Military Academy. Her parents initially disapproved of the match, but Julia and Ulysses were married in 1848 after his service in the U.S.-Mexican War. She travelled with him whenever possible during his military career, including during the Civil War campaigns which made him a popular Union hero. During Grant’s eight years as president (1869-77), Julia earned a reputation as a stylish hostess of extravagant formal affairs, such as the wedding of their daughter Ellen (“Nellie”) in 1874. After leaving the White House, the Grants toured the world for more than two years before settling in New York in 1879. Financial woes in 1884 forced President Grant to write his personal memoirs while he was dying from cancer. Published posthumously in 1885, the memoirs became a bestseller and provided Julia with financial stability. She moved to Washington, D.C. and immersed herself in the social scene. (She also wrote her own memoir, but it was not published until 1975.) She lived another 17 years after her husband died, and she is entombed in the mausoleum at the General Grant National Memorial (Grant’s Tomb) in New York City.

Julia and Ulysses had four children, three boys and one girl, by 1858… Dent was a cousin of the famous Confederate Army general James Longstreet.

Something in Common with Julia Grant