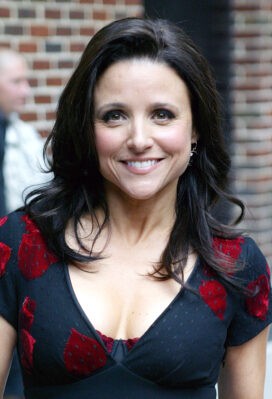 Julia Louis-Dreyfus is the comedian who has starred in the long-running series Seinfeld (1990-98) and Veep (beginning in 2012).

Julia Louis-Dreyfus got her start in big-time comedy at Chicago’s Second City club, and was a regular on TV’s Saturday Night Live from 1982-85. She made her movie debut in Woody Allen’s Hannah and Her Sisters in 1986, but her future was in TV. She played Elaine Benes, the slightly neurotic ex-girlfriend and pal of Jerry Seinfeld, on the now-iconic sitcom Seinfeld from 1990-98. (Their co-stars included Michael Richards as Kramer and Jason Alexander as George Costanza.) That show endures in reruns and has become one of the most famous sitcoms of all time.

After Seinfeld ended in 1998, Julia-Louis Dreyfus starred in a series of her own shows: in the short-lived sitcom Watching Ellie in 2002, then as a divorced mom in another new sitcom, The New Adventures of Old Christine (2006-10), and finally as an anxious and ambitious vice president of the United States in the comedy Veep.

For Seinfeld she was nominated for an Emmy Award seven times and won once, in 1996; for Christine she was nominated for an Emmy five times and won once; for Veep she has been nominated and won the Emmy five times as outstanding actress in a comedy series, in 2012, 2013, 2014, 2015 and 2016. As a producer of Veep, she also was given two Emmys as the show was named the outstanding comedy series of both 2015 and 2016.

Something in Common with Julia Louis-Dreyfus