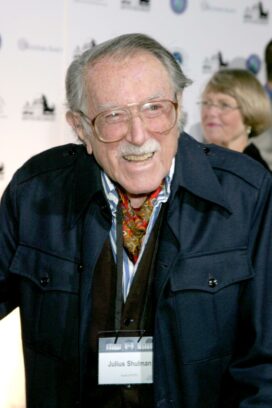 Julius Shulman was the 20th century’s most famous photographer of modern architecture. He grew up on a Connecticut farm and, after 1920, the early days of the city of Los Angeles. An amateur photographer since his teens, Shulman had a chance encounter with architect Richard Neutra in the late 1930s, and Shulman’s career as a photographer of architecture was launched. From the 1940s through the 1960s, Shulman’s photos appeared in major magazines across the globe, and helped infuse modernist art principles into what we now call lifestyle. His work advanced the careers of America’s most famous architects, including Neutra, John Lautner and Frank Lloyd Wright. Shulman officially retired in 1989, but a new appreciation for modernist architecture in the 1990s led to his work being hailed as fine art. By the time he died, Shulman was said to be the guy who first practiced architectural photography as an art form.

Julius Shulman was the subject of a 2008 documentary film, Visual Acoustics: The Modernism of Julius Shulman.

Something in Common with Julius Shulman