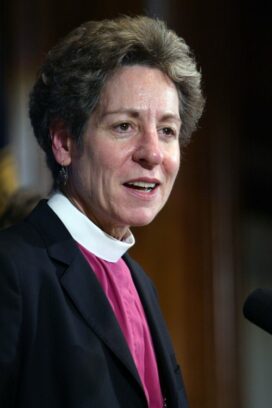 Katharine Jefferts Schori took office in 2006 as presiding bishop of the Episcopal Church in the United States, thus becoming the first woman to reach the level of “primate” in any of the world’s Anglican churches. Jefferts Schori earned a Ph.D. in oceanography and was a marine scientist and a professor in the Pacific Northwest before her ordination in 1994. She served as a parish priest in Oregon and as bishop in Nevada before her 2006 election by the Episcopal General Convention made world news. Some conservatives in America and elsewhere were uneasy with her “liberal” views on homosexuality and other matters. But Jefferts Schori expressed hope for dialogue with all, as well as concern over world poverty, AIDS and environmental threats. At the time of her election, the Episcopal Church had some 2.4 million members and 7,600 local congregations. It belongs to the Christian religion’s Anglican branch, which originated with the Church of England in the 16th century.

Jefferts Schori is a qualified airplane pilot and speaks Spanish and English… She married Richard Miles Schori, a mathematics professor, in 1979. They have an adult daughter, Katharine Johanna… Some 2006 news reports erroneously called Jefferts Schori the first female Episcopal bishop. That distinction belongs to Barbara C. Harris, who had become a bishop in Massachusetts 17 years earlier.

Something in Common with Katharine Jefferts Schori