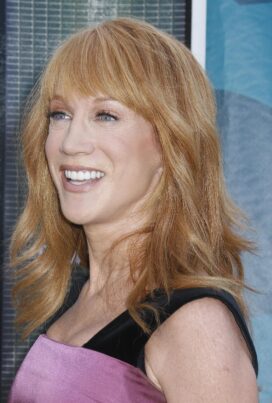 Kathy Griffin is best known for her abrasive comedy in which she makes derisive fun of other celebrities’ behavior.

Born and raised in the Chicago area, she broke into the Los Angeles entertainment scene in the early 1990s by joining an improvisational troupe, the Groundlings, and landing occasional television parts. By the late 1990s she had gained notice with her solo standup act on the comedy-room circuit and with a regular role as Brooke Shields’ co-worker, Vicki Groener, on the NBC sitcom Suddenly Susan (1996-2000). Griffin also appeared in two episodes (in 1996 and 1998) of the legendary NBC series Seinfeld as Sally Weaver, a comedian bent on ridiculing Jerry Seinfeld.

Kathy Griffin’s solo act remained popular in clubs, on college campuses and on cable TV, where her program on the Bravo channel, My Life on the D-List, ran from 2005-10. Its title refers to the low-grade celebrity status she embraces. She also became a regular on CNN’s New Years Eve broadcasts, trading quips with host Anderson Cooper.

Kathy Griffin set off a controversy in 2007 by making a crude remark about Jesus while accepting a best-reality-series Emmy won by D-List; the comment was edited out of the awards broadcast. In May of 2017 she was in much hotter water after posting a comedy video of herself holding up a bloody mask of the head of President Donald Trump. She apologized after being roundly criticized by all sides (including Cooper); a day later, CNN fired her from its New Years Eve team.

Kathy Griffin married Matt Moline, owner of a computer consulting company in 2001; they divorced in 2006. She was later linked romantically for a time with Apple Computer co-founder Steve Wozniak… In 2003 she won $233,000 in prize money on the ABC-TV program Celebrity Mole Hawaii… Kathy Griffin’s eclectic credits include roles as herself in the 1994 movie Pulp Fiction and as the voice of Alice in the 1999-2000 animated TV series Dilbert.

Something in Common with Kathy Griffin