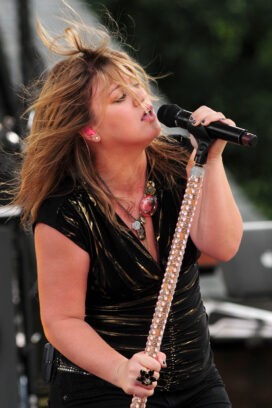 Kelly Clarkson is a pop singer whose career blasted off in 2002 when she won the talent competition in the American Idol television series (hosted by Ryan Seacrest).

With a recording contract and a hit single (“A Moment Like This”), Clarkson was suddenly an international star. Her debut album, Thankful, was released in March of 2003 and immediately rose to the top of the charts, right alongside established stars such as Madonna, 50 Cent and Linkin Park.

Her second album, Breakaway, was another hit, and one of the best selling albums of 2005. Clarkson won a Grammy award as Best Female Pop Vocal Performance for the album’s single, “Since You Been Gone,” and the album was nominated as Best Pop Vocal Album.

Her third record, My December (2007), was released amid news reports of a feud with her record label, the firing of her longtime manager and the cancellation of big shows for a summer tour. The record was characterized by the press as a darker, rock-oriented record — Clarkson breaking free from the constraints of professional songwriters, it was said — and sold respectably, despite a lack of top hit singles.

Clarkson’s songs include “People Like Us,” “Stronger (What Doesn’t Kill You)” and “Don’t You Wanna Stay” (a duet with Jason Aldean).

Something in Common with Kelly Clarkson