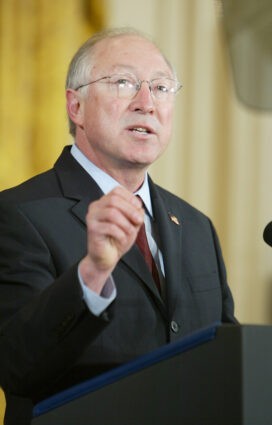 Ken Salazar is the former Colorado senator who became U.S. Secretary of the Interior under President Barack Obama in 2009.

President Joseph Biden named him U.S. Ambassador to Mexico and he was confirmed by the Senate in August of 2021.

A cowboy-hatted lawyer, businessman, farmer and rancher, Salazar was elected to the U.S. Senate from Colorado in 2004. A year earlier, as the state’s attorney general, he led a well-publicized fight against a ballot measure that would have transferred water across the Rocky Mountains from western Colorado to Denver.

He returned to private practice after the Obama administration, and in 2016 was named by Hillary Clinton to lead her transition team, should she win the presidency. She didn’t.

Salazar’s ancestors have lived in the American Southwest since the 1500s, before there was a United States or a Mexico — meaning he is neither an immigrant to the U.S., nor, technically, a Mexican American.

He says he has nonetheless experienced the bigotry and discrimination that are sometimes aimed at those groups.

He holds a bachelor’s degree in political science from Colorado College (1977) and a law degree from the University of Michigan (1981)… He and his wife, Hope, have two daughters, Andrea and Melinda… A Dairy Queen restaurant is among the small businesses he and Hope have operated together.

Something in Common with Ken Salazar