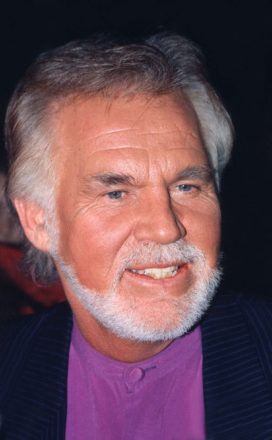 Kenny Rogers was a silver-haired star of both country and pop music from the 1970s into the 21st century, with hits including “The Gambler,” “Islands In the Stream,” and “Lady.”

Born to a working-class Texas family, Kenny Rogers grew up in public housing in Houston and began singing in earnest as a teenager; his 1958 doo-wop recording “That Crazy Feeling” was his first hit. Always willing to cross genres, he played in a jazz trio and then joined the folk supergroup The New Christy Minstrels in 1966, both singing and playing bass. He then co-founded the eclectic rock trio the First Edition in 1967. From 1969 on they were Kenny Rogers and the First Edition, reflecting his rising star as a singer and front man. The group split up in 1975, and Rogers went solo.

By then almost 40, Rogers rebranded himself as a handsome, silver-haired, sweet-talking country gentleman. His 1977 single “Lucille” (“You picked a fine time to leave me, Lucille / With four hungry children and a crop in the field”) went to #1 on both pop and country charts and made him a star.

He followed it with the 1979 album The Gambler, which sold 35 million copies. The title single (written by Don Schlitz) was the story-song of a drifter who receives a life lesson on a train from a dying gambler: “You got to know when to hold ’em, know when to fold ’em.” “The Gambler” became Rogers’s signature song: he won a Grammy Award for best male country vocal, and then starred in a series of five The Gambler TV movies between 1980 and 1994.

Kenny Rogers became the public face of bad plastic surgery in 2006, when too-aggressive eye surgery changed his appearance and gave him a semi-surprised look. He joked about the surgery in later years while touring steadily on the summer-stage-and-casino circuit, including a hit retro appearance at the Glastonbury Music Festival in 2013. He also was the namesake of the Kenny Rogers Roasters restaurants, which he opened in 1991 with former Kentucky governor John Y. Brown, Jr.

Kenny Rogers announced his impending retirement from performing in 2015 and died in 2020. He was inducted into the Country Music Hall of Fame in 2013.

Kenny Rogers’s representatives released a statement after his death that read in part: “The Rogers family is sad to announce that Kenny Rogers passed away [on March 20th] at 10:25 PM at the age of 81. Rogers passed away peacefully at home from natural causes under the care of hospice and surrounded by his family”… An avid photographer, he published the photo collections Kenny Rogers’ America (1986) and Your Friends and Mine (1987)… Kenny Rogers was married five times: to Janice Gordon (from 1958 until their divorce in 1960); to Jean Rogers (from 1960 until their divorced in 1963); to Margo Anderson (from 1964 until 1976); to Marianne Gordon (from 1977 until their divorce in 1993; to Wanda Miller (from 1997 until his death). He had five children in all, including twin sons (Justin and Jordan) born in 2004 to Rogers and Wanda Miller.

Something in Common with Kenny Rogers