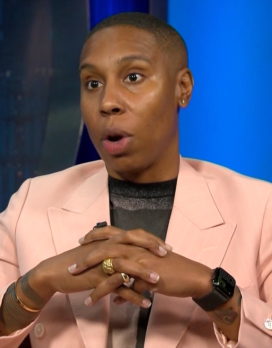 Lena Waithe is 38 years old
Born: May 17, 1984
Birthplace: Chicago, Illinois, United States
Best known as: Writer/producer of the film 'Queenie & Slim' and Denise from 'Master of None'
Buy from Amazon.com: Lena Waithe DVDs and streaming video

Lena Waithe is a television writer and producer who is also known for her acting role in the TV series Master of None.

She grew up in Chicago and moved to Los Angeles after college to become a TV writer in 2006.

She also worked as a producer on Dear White People (2014), and as an actress — most famously as Denise in Master of None (2015-17). In 2017 Waithe won a Primetime Emmy for writing the episode “Thanksgiving” (she shared the award with series creator Aziz Ansari).

By 2018 Waithe had a show of her own creation, The Chi (short for Chicago, her home town); the show’s producers included Oscar winner Common.

Lena Waithe plays Tech, one of the savvy players in the Steven Spielberg movie Ready Player One (2018).

Something in Common with Lena Waithe