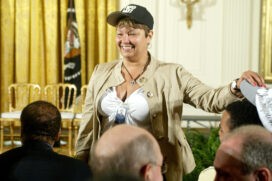 Lisa Jackson became Administrator of the Environmental Protection Agency in 2009 under President Barack Obama. She served in that post until 2013.

She was the first African American to head the federal bureau that enforces regulations and conducts research aimed at clean air, water and soil.

A chemical engineer by training and a government regulator by profession, Jackson served on the EPA staff for 16 years before joining the staff of New Jersey’s Department of Environmental Protection in 2002.

She headed that department from 2006 to 2008 and became chief of staff to Governor Jon Corzine just two weeks before Obama announced her as his EPA pick in December 2008. In her earlier tenure at the federal EPA she administered the cleanup of hazardous waste sites and helped direct a regional enforcement division.

She was succeeded in the post in 2013 by Gina McCarthy.

Jackson holds a bachelor’s degree with honors from Tulane University’s School of Chemical Engineering (1983) and a master’s in chemical engineering from Princeton University (1986)… She lives with her husband, Kenny Jackson, and their two sons in East Windsor, New Jersey… Adopted a few weeks after her birth, she grew up in New Orleans’ Ninth Ward. While visiting there in 2005, she evacuated with her mother when Hurricane Katrina hit.

Something in Common with Lisa P. Jackson