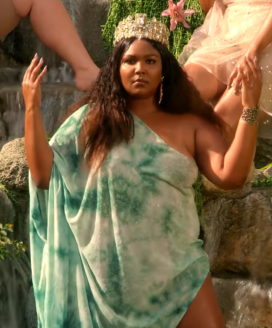 Lizzo is the performing name of Melissa Viviane Jefferson, a Los Angeles-based rapper/singer who got a jumpstart on her career in 2014 by recording with Prince on the song “Boy Trouble.”

With her 2019 album, Cuz I Loved You, Lizzo broke out to larger audiences, in part because of her outstanding tour performances. Crowds loved her unabashed “self-love” and body-positive brand of feminism, as well as her funky, soulful hits, including “Juice” and “Truth Hurts.”

Lizzo was born in Detroit and raised in Houston, and she began her recording career in Minneapolis.

It wasn’t long before she was noticed in the Minneapolis nightclubs, while also releasing albums of her own, including 2013’s Lizzobangers and 2015’s Gig Grrrl Small World.

Lizzo’s other songs include “Batches & Cookies,” “Good as Hell” and “Tempo” (with Missy Elliott).

Something in Common with Lizzo