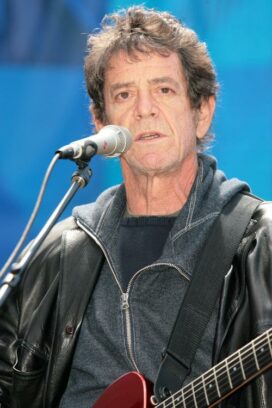 Guitarist Lou Reed co-founded and wrote most of the songs for the New York rock group The Velvet Underground (1965-70). The influential band recorded such cult favorites as “Heroin,” “Sweet Jane” and “Sister Ray.” The Velvet Underground, at first associated with Andy Warhol and the singer Nico, was never a huge popular success, but it has been credited with influencing a generation of punk and post-punk rockers in the 1970s and ’80s. During the ’70s, Lou Reed and David Bowie were among the top acts in “glam rock,” a theatrical style of gender-bending rock and roll. Reed’s solo hits from the ’70s include “Walk On The Wild Side” and “Street Hassle,” as well as re-vamped versions of several of his Velvet Underground songs. The gender-bending, not-exactly-family-friendly “Walk on the Wild Side” became his biggest hit and includes the famously odd lyrics, “And the colored girls go, “Doo do doo do doo do do doo…” By the end of the 1990s, Lou Reed had become an elder statesman of rock and roll, a mature songwriter with a reputation for thoughtful urban ballads. He was inducted into the Rock and Roll Hall of Fame in 1997. He had a liver transplant in May of 2013, and died in October of that same year.

Lou Reed married musician and performance artist Laurie Anderson in 2008; they had been a couple for several years before that.

Something in Common with Lou Reed