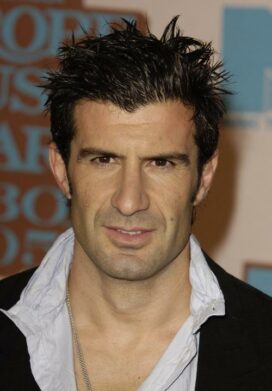 Figo is a football hero who began his professional career in Portugal, his native land, then made his name in Spain playing for powerhouse teams FC Barcelona and Real Madrid before switching to Inter Milan in 2005. With his deft stop-and-go dribbling and aggressive style, the midfielder was known more as a playmaker than as a pure scorer. His breakthrough year was 2000, when he led Portugal to the semifinals of Euro 2000 and was named European Footballer of the Year. The same year he moved from FC Barcelona to rival Real Madrid for a then-record fee of $56 million — a controversial move that made him highly unpopular with Barcelona fans. In 2001 he achieved football’s highest individual honor, being named FIFA World Player of the Year. In 2005 he moved to Inter Milan, where he played until his retirement in 2009. He played for Portugal in the World Cups of 2002 and 2006.

Something in Common with Luis Figo