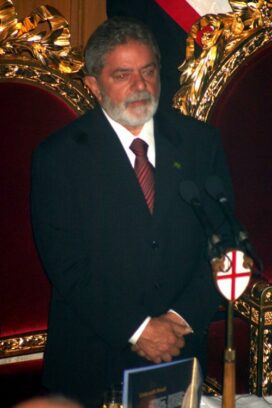 Luiz Inácio Lula da Silva was president of Brazil from 2002-2010, and then was reelected to the office in a surprise comeback in 2022.

Luiz da Silva was born into poverty and trained as a metalworker, gradually becoming active in the Metalworker’s Union. He was elected president of the union in 1975. He was a prominent labor spokesman during a series of strikes (1978-81) and became a co-founder of the Partidos Trabalhadores (known as the PT, or Labor Party).

He was elected to the country’s House of Representatives in 1986 as a populist left-wing candidate known widely as Lula (a nickname he added to his name legally in 1982). Four years later, in 1990, made his first of three unsuccessful runs at the presidency as a PT candidate. Luiz da Silva was a populist left-wing candidate three times before winning as the leader of a coalition of parties behind the banner of the Partidos Trabalhadores (PT, or Labor Party).

Lula was finally elected president in 2002 as the leader of a coalition of parties. He ran on a platform of economic and political reform, promising especially to attack hunger in Brazil. He ran for reelection in 2006; despite a corruption scandal that tarnished his reputation as a reformer, he beat challenger Geraldo Alckmin in October of 2006 for a second term. He was succeeded in 2011 by President Dilma Rousseff.

Da Silva’s post-presidency years were haunted by accusations of corruption, but he remained popular, and he seemed to be headed for a presidential run again in 2018. In 2016, however, his home was raided by federal police and he was eventually charged with money laundering and corruption in relation to the larger Petrobras scandal, in which public officials were accused of taking bribes and kickbacks (and in Lula’s case, a luxury seaside apartment) related to the state-controlled oil company.

Da Silva denied all the accusations and suggested he was the victim of political machinations. After trials and appeals all the way to the Supreme Court of Brazil, Luiz da Silva was given two different sentences of 12+ years and barred from running for political office. He went to prison in 2018, but was released in 2019 after a Supreme Court ruling that he could remain free while appealing his convictions. In 2021, a Supreme Court judge dismissed his earlier convictions (subject to later appeal), and Lula was again free to run for president.

Which he did in 2022, winning a narrow election over the far-right incumbent, Jair Bolsonaro.

Lula, the nickname he legally adopted in 1982, is a play on his first name of Luiz; lula means “squid” in Portuguese… Luiz da Silva has been married three times: to the former Maria de Lurdes Ribeiro (from 1969 until her death from hepatitis in 1971); to Marisa Letícia Rocco Casa (from 1974 until her death in 2017; she was First Lady of Brazil during his terms as president from 2002-10); and to the sociologist Rosângela da Silva (known as Janja), whom he married in 2022… Lula has five children in all: a daughter from an unmarried relationship with Miriam Cordeiro in 1974, and three with his second wife, Marisa Letícia Rocco Casa; he also adopted Marisa Letícia’s son from her first marriage.

Something in Common with Luiz Inácio Lula da Silva