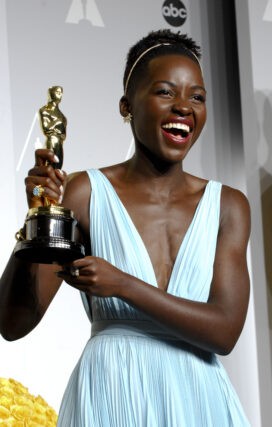 Lupita Nyong’o was the surprise winner of an Oscar for her supporting role in her feature film debut, Steven McQueen‘s drama 12 Years a Slave. The daughter of a Kenyan politician, Lupita Nyong’o was born in Mexico City and raised in Kenya. She studied film and theater at Hampshire College in Massachusetts, and, after graduating in 2003, worked in the TV and film business in Nairobi and Kenya. Nyong’o then returned to the United States to the Yale School of Drama and earned her graduate degree in 2012. She then won the part of Patsey, ally of Solomon (Chiwetel Ejiofor) and victim of Master Epps (Michael Fassbender), in 2013’s 12 Years a Slave. A hit during awards season for her red carpet appearances, Nyong’o graced magazine covers and earned a fashion spot as one of the 2014 faces of Miu Miu clothing. At the Academy Awards of 2014, she defeated actresses like Jennifer Lawrence and Julia Roberts to win the Oscar as best supporting actress; 12 Years a Slave also won the Oscar as the year’s best picture.

Something in Common with Lupita Nyong’o