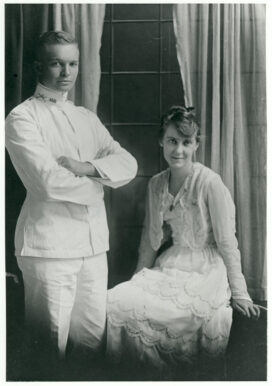 The wife of President Dwight D. Eisenhower, Mamie Eisenhower was First Lady of the United States from 1953 to 1961. The daughter of a wealthy meatpacker, Mamie grew up in Colorado. Her family had a winter home in San Antonio, Texas, where she met army officer Dwight (“Ike”) Eisenhower in 1915. They were married on 1 July 1916 and for the next three decades Mamie was an itinerant military wife, following Ike all over the world. (During World War II, while Ike was a general overseas, she lived in Washington, D.C. with their son, John.) As the first lady she was a popular hostess with the apron-and-pearls image of a 1950s American housewife. Her young life of privilege didn’t train her for doing the chores herself, however, and Mamie ran the staff of the White House with military precision. After she and Ike left the White House they retired to their farm in Gettysburg, Pennsylvania. After Ike died in 1969 she stayed in the public eye as a part of the Richard Nixon family — Mamie’s grandson David married Nixon daughter Julie in 1968. A stroke disabled Mamie in late September of 1979, and she died at Walter Reed Hospital five weeks later.

Ike and Mamie’s first son, Doud Dwight, died of scarlet fever in 1921, at the age of three. John, their only other child, was born in 1922… Mamie’s hairdo — a modest cut with bangs — was first styled for her in Paris by Elizabeth Arden.

Something in Common with Mamie Eisenhower