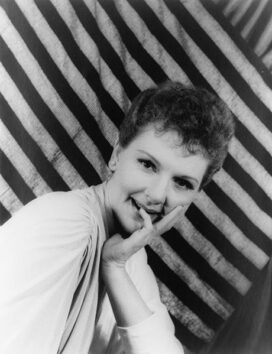 Mary Martin was a Broadway superstar in the 1950s, when she played spunky characters like Peter Pan and Maria von Trapp and won four Tony Awards over 13 years. Mary Martin’s stardom as a singer, dancer and actress began in New York City in 1938 with her nightly show-stopping rendition of “My Heart Belongs to Daddy” in the Cole Porter musical Leave it to Me. She then made 10 films in four years with Paramount Pictures, but her real power remained on the Broadway stage, to which she returned in the 1940s. Four Tony Awards for lead roles followed: special recognition in 1948 for the touring production of Annie Get Your Gun, then best actress in a musical for South Pacific (1950), Peter Pan (1955) and The Sound of Music (1960). (Both South Pacific and The Sound of Music were written by Broadway titans Richard Rodgers and Oscar Hammerstein.) Mary Martin turned 41 in 1954, the year she started flying around the stage, suspended by cables, as Peter Pan, the magical, elf-like boy who refuses to grow up. She recreated the role to great acclaim on network television in 1960.

Mary Martin was 16 when she married Texas accountant Benjamin Hagman, with whom she had one child, the actor Larry Hagman. Martin and Benjamin Hgaman divorced in 1935. In 1940, she married Paramount editor and producer Richard Halliday, who became her manager. They had a daughter, Heller Halliday, in 1941… Mary Martin reportedly turned down a role in the hit TV series Dallas (1978). Had she accepted, she would have played Miss Ellie, mother of J.R. Ewing, who was played by her son Larry Hagman… The role of Maria von Trapp was famously played by Julie Andrews in the 1965 movie version of The Sound of Music.

Something in Common with Mary Martin