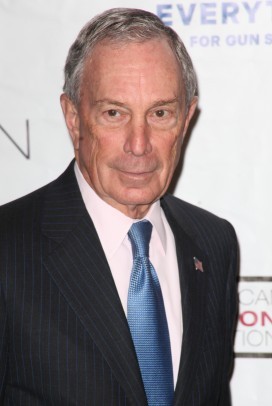 Michael Bloomberg is the billionaire businessman who also served as mayor of New York City for three terms from 2002 through 2013.

Michael Bloomberg graduated from Johns Hopkins University in 1964 with a bachelor’s degree in electrical engineering, then earned an MBA from Harvard Business School in 1966.

He was a general partner at Salomon Brothers when he was let go in 1981 (after a merger), and that same year he founded Innovative Market Systems (later Bloomberg LP).

The service turned Bloomberg into a billionaire and made his name synonymous with business information. He published an autobiography, Bloomberg by Bloomberg, in 1997.

Bloomberg shifted gears in 2001 and ran for New York mayor as a Republican; he defeated Democrat Michael Green just two months after the attacks of 11 September 2001, and succeeded fellow Republican Rudy Giuliani.

Bloomberg was reelected in 2005 and again in 2009 (after the New York city council overturned a two-term mayoral limit). As mayor, Bloomberg was considered a fiscal moderate but a social progressive; his drive to ban smoking in restaurants and other public places was controversial but ultimately became the law of the city.

He stepped down after three terms and was succeeded by Democrat Bill DeBlasio.

Upon leaving office Bloomberg focused on his charitable and non-profit activities; he was appointed a United Nations Special Envoy for Cities and Climate Change in 2014, and the same year founded the gun control group Everytown for Gun Safety.

He returned to running the Bloomberg business empire full-time in 2015. That same year, Forbes magazine said Michael Bloomberg was the 14th-richest person in the world, just ahead of Amazon.com’s Jeff Bezos, with a personal fortune of $35.5 billion.

He remained a political independent, and in 2016 launched a “defeat Donald Trump” campaign for the presidency that was unsuccessful.

Michael Bloomberg was New York City’s 108th mayor… His middle name is Rubens; it is his mother’s maiden name… He was a Democrat for many years before switching to the Republican party shortly before his run for mayor. In 2007 he left the Republican party and registered as an independent… He founded his business as Innovative Market Systems in 1981; it was renamed Bloomberg LP in 1986… Michael Bloomberg was married to the former Susan Brown from 1975 until their divorce in 1993. They had two daughters, Emma (b. 1979) and Georgina (b. 1983)… Bloomberg Radio went on the air in 1993; Bloomberg TV went live on cable in 1994; and Bloomberg.com went online in 1995… New York City’s mayors are sworn into office on January 1, which is why Bloomberg’s 12 full years in office cover the years 2002 to 2003; Bill DeBlasio was sworn in on January 1, 2014.

Something in Common with Michael Bloomberg