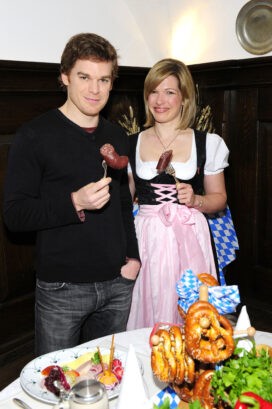 Michael C. Hall plays a serial killer who kills other serial killers in the cable TV series Dexter. A native of North Carolina, Hall began his career on the New York stage after graduating from Indiana’s Earlham College (1993) and New York University’s Tisch School of the Arts (1996). His big stage break came in 1999, when he replaced Alan Cummings (as the emcee) in the late revival of Cabaret. Hall then made a splash on the critically-acclaimed cable series Six Feet Under (2001-05); he played David, a self-loathing, gay mortician (Hall is heterosexual), a role that brought him stardom and an Emmy nomination (2002). When that series ended Hall bounced back with a second successful cable series, Dexter (since 2006), in which he plays Dexter Morgan, a police forensics specialist whose secret purpose in life is to kill killers who have escaped justice.

Hall married Dexter co-star Jennifer Carpenter on 31 December 2008; in the show Carpenter play’s Dexter’s sister, Debra. They announced their divorce in December of 2010.

Something in Common with Michael C. Hall