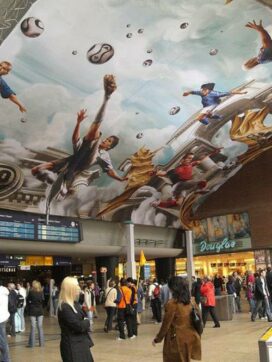 Perhaps the greatest influence on western art in the last five centuries, Michelangelo was an Italian sculptor, architect, painter and poet in the period known as the High Renaissance. His great works were almost entirely in the service of the Catholic Church, and include a huge statue of the biblical hero David (over 14 feet tall) in Florence, sculpted between 1501 and 1504, and the ceiling of the Sistine Chapel in Rome (commissioned by Pope Julius II), painted between 1508 and 1512. After 1519 Michelangelo was increasingly active in architecture; he designed the dome of St. Peter’s Basilica, completed after his death. Along with contemporaries Leonardo da Vinci and Raphael, he is considered one of the great masters of European art.

Michelangelo’s David was sculpted during almost the same years that da Vinci was painting the Mona Lisa.

Something in Common with Michelangelo