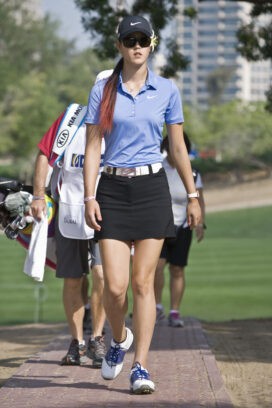 By the time golfer Michelle Wie turned pro in October 2005 — days prior to her 16th birthday — she had already proven herself worthy of competing against both men and women on the PGA and LPGA tours. Wie began playing golf at the age of four, and at the age of 10 became the youngest-ever player to qualify for a USGA amateur championship. In 2003 she became the youngest-ever winner of the US Women’s Amateur Public Links Championship. That same year, at the age of 13, she made her first appearance in an LPGA Major tournament, competing against the likes of Annika Sorenstam. Known for her height (she’s 6′ tall) and her long drives, Wie has also competed against men, including the PGA Sony Open and the Hawaii Pearl Open in 2003, missing the cut but making impressive showings that put her in the middle of a pack of professionals. By the time she was 14 she had made the cut in seven LPGA Tour events (out of seven attempts), including two finishes in the top ten and four in the top 20. In 2005, while still an amateur, she tied for second at the LPGA’s SBS Open in February, and in June finished second to Sorenstam at the LPGA Championship. When she turned pro, Wie already had multi-million endorsement deals from Nike and Sony and was being compared to Tiger Woods, for both her talent and her ability to draw audiences to the sport. In 2006 she competed mostly in men’s events, including the European Tour, and also tied for third in the US. Women’s Open, but made a disappointing showing overall and her reputation as a phenom began to fade. Her game fell off in 2007 due to an injured right wrist injury, but she was still a media draw and still in her teens. Wie qualified for an LPGA tour card in 2008 and debuted professionally in 2009.

Before Wie became the youngest-ever LPGA qualifier, that title was held briefly by Natalie Gulbis… Her last name is pronounced “wee.”

Something in Common with Michelle Wie