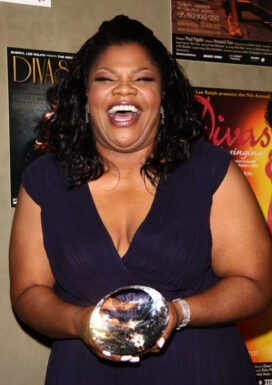 Mo’Nique is the hefty, hearty, “phat and fabulous” comedienne whose turn as a bitterly abusive mother in the 2009 film Precious won her an Academy Award as best supporting actress. Mo’Nique grew up in Baltimore, began doing stand-up comedy in her early 20s, and eventually quit a job at the phone company to devote herself to comedy. She rose steadily and made the rounds of African-American cable shows like Showtime at the Apollo and Def Comedy Jame. From 1999-2004 she starred in the sitcom The Parkers as Nikki Parker, a brassy single mother attending college with her grown daughter. Mo’Nique thrice won the annual NAACP Image Award as best actress in a comedy series for the role. At the same time she began picking up small roles in films like Three Strikes (2000) and Half Past Dead (2002), and by 2006 she had a starring role as a struggling fashion designer in the indie film Phat Girlz. She has continued to juggle comedy, movies and TV, and in 2009 began hosting a late-night talk show The Mo’Nique Show. Never shy about her weight, Mo’Nique is a self-described “role model for voluptuous women everywhere, proving that you don’t have to be a size 0 to be sexy and fabulous.” She drove the point home with her 2003 book, Skinny Women Are Evil.

Something in Common with Mo’Nique