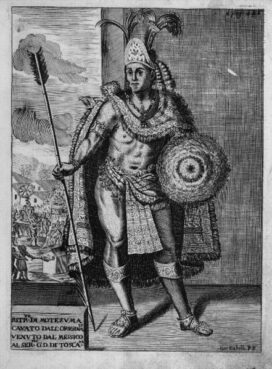 Born: 1480
Died: 1520
Birthplace: Tenochitlan (Mexico City), Mexico
Best known as: The leader of the Aztecs at the time of the Spanish conquest

Montezuma II (also known as Moctezuma II) was trained as a priest and rose to become leader of the Aztecs in 1502. At the time, the Aztecs controlled most of what is now Mexico and Central America, their capital being at the great city of Tenotchitlan (Mexico City). The story goes that when the Spanish conquistador Hernan Cortes arrived in the Aztec lands in 1519, Montezuma thought the Spanish conquerors were descendants of the god Quetzalcoatl. Montezuma allowed the Spaniards to enter Tenotchitlan unopposed, and he was then captured and held hostage by Cortés. The situation ended badly: Montezuma was either stabbed by the Spaniards or killed by a rock to the head thrown by a crowd of his own people, depending on who tells the story. Within a few years of his death, the Spanish had conquered the Aztecs and taken control of what became Mexico.