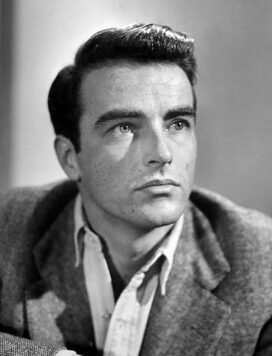 Montgomery Clift was a handsome and troubled leading man of stage and screen, most widely known for his Oscar-nominated performance as Pvt. Prewitt in the 1953 film From Here to Eternity.

Montgomery Clift grew up in the midwest and on the east coast, and started acting on Broadway as a teenager; by age 18 he was playing leading roles and was an early member of the prestigious Actor’s Studio. He eventually moved on to Hollywood, where his brooding, reluctant-hero presence was a novelty and made him a popular leading man of the post-war era.

In the World War II drama From Here to Eternity, he played a boxer-turned-Army-bugler who gets rough treatment when he refuses to fight again. The film, which also starred Frank Sinatra and Burt Lancaster, won best picture and seven other Oscars. (Both Clift and Lancaster were nominated for best actor, and Frank Sinatra won the Oscar as best supporting actor.) Other films for which Clift was Oscar-nominated included The Search (1948), A Place In the Sun (1951), and The Misfits (1961, the last completed film of both Marilyn Monroe and Clark Gable).

Clift is also known for the turmoil in his private life. His sexual preferences remain the subject of much speculation, and he sometimes drank heavily, especially after a 1956 car crash that broke his jaw and nose. Clift and Elizabeth Taylor had a famous friendship and co-starred in the films A Place in the Sun (1951), Raintree Country (1957, with Eva Marie Saint) and Suddenly, Last Summer (1959, with Katharine Hepburn).

Montgomery Clift never married and had no children… Montgomery Clift was 5 feet, 9 1/2 inches tall, according to CelebHeights.com… Montgomery Clift’s 1956 car crash happened while he was on his way to a party at the home of Elizabeth Taylor. Clift crashed into a telephone pole; his face was heavily damaged and required extensive cosmetic surgery… The song “Monty Got a Raw Deal” by the rock group R.E.M. is about Montgomery Clift.

Something in Common with Montgomery Clift