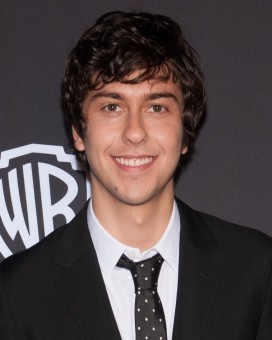 As a mop-haired and musical teen, Nathaniel Wolff first became known as the lead singer and keyboardist for the fictional TV pop group The Naked Brothers Band. The band featured Nat Wolff and his real-life younger brother Alex, the drummer.

They first starred in the 2005 spoof film The Naked Brothers Band, playing characters named Nat and Alex. In 2007 the band got its own self-titled show on the cable channel Nickelodeon. As the older brother, Nat was the band’s leader and front man, and actually wrote many of the songs the band played on the show. He was easy to confuse with his fictional self; the show’s website called Nat “The Girl Magnet” and said that “When the sweet, sensitive Nat’s not writing the band’s next hit, he’s fending off the female fans.” The Nickelodeon series ran from 2007-09, and the band’s albums included The Naked Brothers Band (2007) and I Don’t Want To Go To School (2008).

As the show ended and the 2010s arrived, Nat Wolff turned more to acting; his feature films have included the comedy-drama Peace, Love and Misunderstanding (2011, with Jane Fonda), the coming-of-age drama Palo Alto (2013, co-written by James Franco) the broad comedy Behaving Badly (2014, with Selena Gomez), and The Fault in Our Stars (2014, with Shailene Woodley). He and his brother have also continued to perform as Nat & Alex Wolff.

Nat Wolff’s parents are showbiz veterans: Michael Wolff is a jazz musician and the former bandleader for The Arsenio Hall Show, and Polly Draper starred on the 1980s TV drama Thirtysomething. The couple played Nat’s parents in the original Naked Brothers Band movie.

Something in Common with Nat Wolff