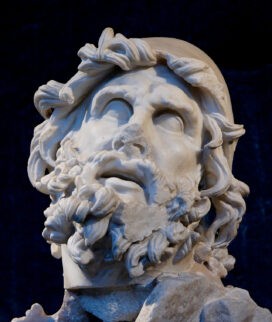 Odysseus is the great hero of The Odyssey, the classic tale by the ancient bard Homer.

The Odyssey tells of Odysseus’s 10-year struggle to return from the Trojan War to his home in Ithaca. A manly warrior at Troy (he was among those who hid in the famous Trojan Horse), Odysseus is cunning and resourceful, but also loaded with his share of pride and human failings.

On his travels with his men, Odysseus survives encounters with many of ancient literature’s most famous characters, from the monstrous one-eyed Cyclops to the tempting (and deadly) Sirens. He is by turns aided and thwarted by the whimsies of Zeus, Poseidon and other Greek gods. After 20 years away from home (10 for the war and 10 for the trip back) he returns to his long-waiting wife, Penelope, and slays the greedy suitors who have besieged her.

Did Odysseus exist in real life? No evidence exists to prove that he did (or did not) exist, but most of the tales told about him by Homer are clearly fiction.

Still, Odysseus’s mighty deeds and all-too-human weaknesses have made him a favorite with scholars and storytellers down through the years. Alfred, Lord Tennyson’s Ulysses was one of the best-known poems of the 1800s, and James Joyce‘s groundbreaking novel Ulysses used Homer’s adventures as the inspiration for a modern-day tale set in Dublin.

His name is pronounced o-DISS-ee-oos… The New York city of Ithaca, home of Cornell University, took its name from the isle of Ithaca, birthplace of Odysseus in The Odyssey… Yes, Odysseus and Ulysses are the same guy: Odysseus is his name in the original Greek, Ulysses the rendering in Latin and English… His father is Laertes, king of Ithaca, and his son (who was a mere infant when Odysseus left for Troy) is named Telemachus… Before marrying Penelope, Odysseus had unsuccessfully wooed Helen of Troy… Some ancient stories say that Odysseus not only hid in the Trojan Horse, but thought up the whole idea himself… Homer’s The Iliad and The Odyssey are often mentioned in the same breath; The Iliad tells the tale of Achilles and the Trojan War, The Odyssey of Odysseus’s return.