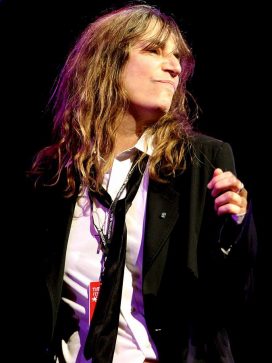 Born in the midwest, she grew up in New Jersey, and moved to Manhattan in 1967. She soon met Robert Mapplethorpe — he was not yet a famous photographer — and they were roommates and, for a time, lovers. Patti Smith spent her time reading and writing and drawing, while Mapplethorpe focused on the art of photography.

Hanging out with musicians, artists and writers led to Patti Smith getting a record deal and releasing her first album, 1975’s Horses. Over the course of her recording career, she released a dozen albums, creating a loyal following if not reaching a wide audience. Her best-known songs are 1978’s “Because the Night” (written with Bruce Springsteen) and her cover of the song “Gloria,” with its memorable opening line, “Jesus died for somebody’s sins, but not mine.”

She has exhibited photographs, published poetry and influenced countless musicians from the early days of punk, and her 2010 memoir of living with Mapplethorpe, Just Kids, was a bestseller late in her career.

Something in Common with Patti Smith