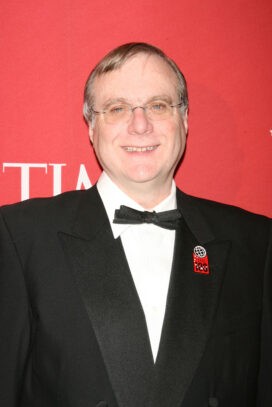 Paul Allen co-founded the company Microsoft with Bill Gates in 1975. Microsoft grew into one of the great success stories of the personal computer era and one of the world’s largest companies.

Paul Allen left the company in 1983 after a bout with lymphoma, but he remained a member of Microsoft’s board of directors until 2000, and his company stock made him a billionaire many times over.

On his own he made a name for himself as a founder of and shrewd investor in hi-tech firms like Starwave, America Online and Ticketmaster, and as the enthusiastic owner of the NBA’s Portland Trailblazers and the NFL’s Seattle Seahawks. (He claimed his first championship as an owner when the Seahawks won Super Bowl 48 on February 2, 2014.)

Paul Allen published an autobiography in 2011, titled Idea Man: A Memoir by the Cofounder of Microsoft.

He died at the age of 65, after a long battle with non-Hodgkin’s lymphoma.

Paul Allen never married. He told the CBS show 60 Minutes in 2011 that he “I still believe I’m going to meet somebody… I want to have a family”… He bankrolled a Seattle museum, the Experience Music Project, inspired by late guitarist Jimi Hendrix. It later added science fiction content and other exhibits and was renamed the Museum of Pop Culture in 2016… Paul Allen was the owner of the Octopus, a super-yacht built for him and delivered in 2003. The yacht was 414 feet long and  had “seven decks, two helicopter pads, a swimming pool and a basketball court,” according to a 2012 Associated Press story.

Something in Common with Paul Allen