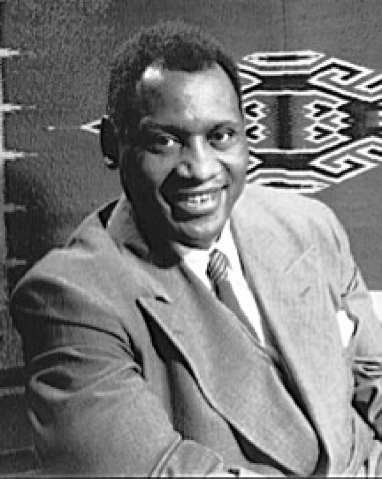 Paul Robeson was a singer, actor and African-American activist whose performing career was hampered by the anti-communist craze of the 1950s.

Paul Robeson attended Rutgers College on a scholarship and proved himself to be a stellar athlete and scholar. The college’s only Black student, he was an All-American football player, sat on the student council and graduated with honors in 1919.

He then attended Columbia Law School and was admitted to the bar in 1923, but the multi-talented Robeson turned toward the theater instead. He had great success in shows from Show Boat to plays by Eugene O’Neill and William Shakespeare; he was a sensation in England and the U.S. for his portrayal of Othello. Robeson toured the U.S., Britain, Europe and the Soviet Union (where he received a particularly warm welcome in 1934).

Onstage, Paul Robeson was a star both as an actor and a singer; besides plays, he recorded and gave concerts of traditional folk and gospel songs. Offstage, Robeson was outspoken about racial injustice in the U.S. and an advocate for world peace and socialism. He made about a dozen films, but gave up in disgust in 1942 at the lack of options for African American actors.

Paul Robeson’s performing career was cut short in 1950, when the U.S. State Department questioned his patriotism and took away his passport. (When asked by the House Un-American Activities Committee in 1956 if he was a communist, Robeson told them it was none of their business.)

By 1958, his passport was restored and he embarked on an international tour, giving concerts and returning to the stage in Othello. He spent five years touring, with London as his base, then returned in 1963 to the U.S. He spent his last years in ill health with his sister in Philadelphia.

Although he is sometimes criticized for defending Joseph Stalin‘s Soviet Union and for choosing not to actively participate in the Civil Rights movement of the 1960s, Robeson is still widely considered an overlooked activist hero.

Paul Robeson was instrumental in the early writing career of playwright Lorraine Hansberry, the author of Raisin in the Sun.

Something in Common with Paul Robeson