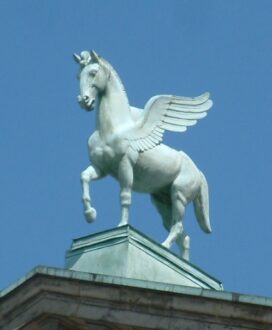 Pegasus is a mighty winged horse of Greek myth. According to legend, Pegasus sprang forth from drops of blood when Perseus cut off the head of Medusa. The horsemaster Bellerophon tamed Pegasus with a golden bridle provided by the goddess Athena. Together horse and rider slew the fire-breathing monster Chimera. (Legends vary, but some say Pegasus and Bellerophon performed other heroic deeds together.) Finally, Bellerophon tried to fly to heaven to join the gods, but Pegasus threw him off and the two were separated forever, with Pegasus living on as a constellation of stars.

Pegasus also lives on in the logo of Mobil gasoline.

Something in Common with Pegasus