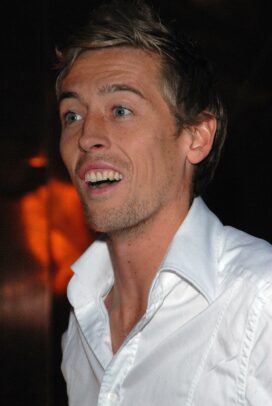 Nice Day for a WAG Wedding

The Daily Mail covers his 2011 marriage to Abbey Clancy

Short profile and stats from a site full of football bios

Peter Crouch is the distinctively tall forward who plays soccer for Tottenham Hotspurs and England. After bouncing around with several pro teams, Peter Crouch landed with Liverpool in 2005 and developed into a star. At a height of 6 feet 7 inches (198 centimeters) he was the tallest player in the English Premier League. Peter Crouch played his first game for the national team in May of 2005, and scored his first World Cup goal for England in an opening-round game against Trinidad and Tobago in 2006. Since 2009 he has played for Tottenham Hotspurs of the English Premiere League. Crouch’s comical “robot dance” of celebration after scoring goals has been a hit with fans.

Something in Common with Peter Crouch