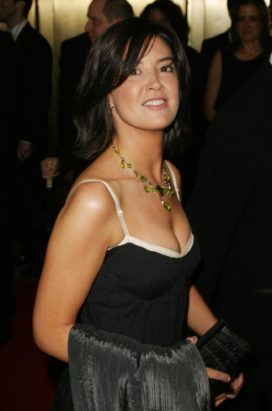 Phoebe Cates made a splash as poolside dreamgirl Linda Barrett in the 1982 movie Fast Times at Ridgemont High.

Phoebe Cates was a child model and also a dancer who studied at the American School of Ballet until a knee injury ended her dance career at age 14. She moved into acting and had her first major role in the teens-in-a-desert-oasis romance Paradise (1982). After her success there and in Fast Times at Ridgemont High, Cates had a series of ingenue roles in 1980s movies like Gremlins (1984) and Bright Lights, Big City (1988).

Cates also did some theater, including one Broadway credit listed on the Internet Broadway Database: a leading role in the play The Tenth Man at the Vivian Beaumont Theater. The play, written by Paddy Chayefsky, ran from December 10, 1989 through January 14, 1990.

Phoebe Cates married the actor Kevin Kline in 1989, and they had two children: Owen (b. 1991) and Greta (b. 1994). After playing the title role of a mysterious missing royal in Princess Caraboo (1994), she went on a hiatus, taking no more feature roles until her part in the ensemble piece The Anniversary Party in 2001. She opened a Manhattan gift boutique, Blue Tree, in 2005.

Phoebe Cates’s daughter, Greta Kline, has made a name for herself as a singer and songwriter… Phoebe Cates’s uncle, Gil Cates, produced the annual Academy Awards telecast multiple times… Her father, Joseph Cates, was a director known (according to CNN’s obituary) for casting Art Carney opposite Jackie Gleason in TV’s The Honeymooners.

Something in Common with Phoebe Cates