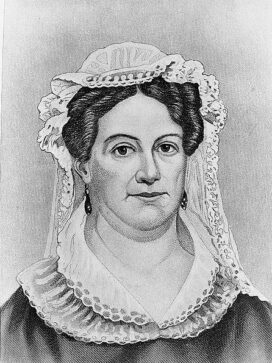 Official site of the Jackson historic estate in Tennessee

Biography from The White House

Rachel Jackson was married to President Andrew Jackson for nearly four decades, but she died just after he was elected president in 1828. She was the daughter of pioneers who settled in Tennessee country when she was about 12. She married Lewis Robards of Kentucky in 1785, but after three years of a rollercoaster marriage — he has gone down in history as a jealous abuser — Robards left her in Nashville on her own. Andrew Jackson escorted her to Mississippi and they were married in 1791, having heard that Robards had secured a divorce. It turns out he had only secured permission to file for divorce. Robards sued, citing adultery, and his divorce from Rachel was final in 1793. A few months later Andrew and Rachel married again, in January of 1794. While Jackson had his military and political career, Rachel stayed mostly at their home in Nashville, an estate called The Hermitage. Though they never had children of their own, the Jacksons helped rear several children; they adopted her nephew, Andrew Jackson Donelson, in 1808, and a Creek Indian boy, Lyncoya, came to live at The Hermitage in 1813. The circumstances of Rachel’s first divorce were a favorite target of Jackson’s political opponents, and after he lost the 1824 election to John Quincy Adams, Jackson undertook a public relations campaign to defend Rachel’s honor. Jackson won the presidential election of 1828, but before the family could leave for Washington Rachel died at home.

Although it is uncertain if her birth was recorded correctly, most sources list the date as 15 June 1767.

Something in Common with Rachel Jackson