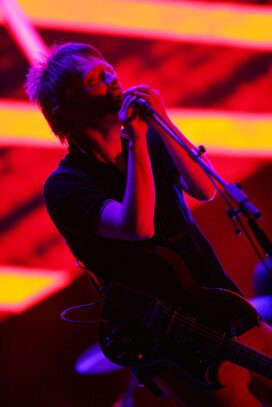 Their own site, less band info and more politics

Climbing Up The Walls

Comprehensive and dedicated hub for fans

Unofficial fan site with all the right stuff

Radiohead is made up of five schoolmates from Oxford, England: Thom Yorke (b. 7 October 1968), Ed O’Brien (b. 15 April 1968), Johnny Greenwood (b. 7 November 1972), Colin Greenwood (b. 26 June 1967) and Phil Selway (b. 23 May 1967). Their first album, Pablo Honey was released in 1993 to critical acclaim and included the hit song "Creep." Their second release, The Bends (1995), was an even bigger success and included the song “High and Dry.” Critics especially loved their third release, OK Computer (1997), and the record was nominated for a Grammy in 1998 as Best Album of the Year. They were again nominated for Best Album for their "concept" release, Kid A (2000) and Hail to the Thief (2003), building a loyal audience through musical experimentation rather than chart-toppers. Their 2007 release, In Rainbows, brought them back into the spotlight as a commercially successful band and earned rave reviews. The band released The King of Limbs in February of 2011.

In Rainbows was originally released only as a digital download. Buyers were asked to set their own price. Sales reports were varied and unreliable, but after the physical release of the CD ten weeks later the band pronounced the distribution experiment a success.

Something in Common with Radiohead